Three-Way Catalysts includes reactions between CO, HC, and NOx result in the simultaneous removal of all three major exhaust pollutants.Three-way catalysts are used with air to fuel ratio controllers which maintain the mixture composition at stoichiometric. These controllers utilize a feedback signal from the oxygen sensor positioned in front of the catalyst in the exhaust system. The range of A/F ratio required for satisfactory catalyst operation is known as the “catalyst window”.Concentrations of pollutants in the exhaust gas depend on the fuel mixture composition. At lean fuel mixtures the exhaust gases contain little carbon monoxide or hydrocarbons but high concentrations of NOx. 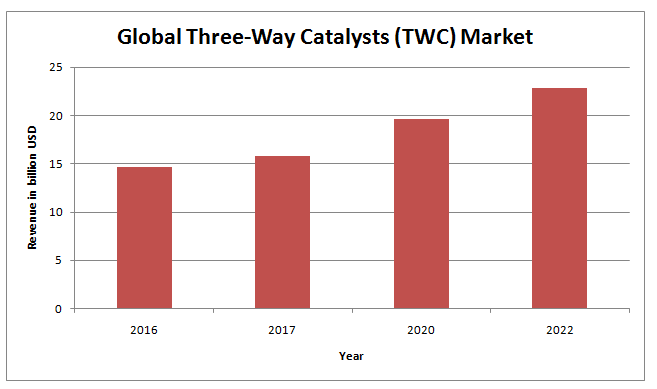 Three-way converters are effective when the engine is operated within a narrow band of air-fuel ratios near the stoichiometric point, such that the exhaust gas composition oscillates between rich (excess fuel) and lean (excess oxygen). Conversion efficiency falls very rapidly when the engine is operated outside of this band. Under lean engine operation, the exhaust contains excess oxygen, and the reduction of NOx is not favored. Under rich conditions, the excess fuel consumes all of the available oxygen prior to the catalyst, leaving only oxygen stored in the catalyst available for the oxidation function.