The global Non-Volatile Memory Market is valued at USD 52.3 billion in 2016 and is expected to reach USD 120.44 billion by the end of 2026, growing at a CAGR of 8.7% between 2017 and 2025. Non-volatile memory (NVM) is an electrically programmable and erasable semiconductor technology that does not require a continuous power supply to retain the data or program code stored in a computing device as it retains that change even after power outage. Non-volatile memory is also known as non-volatile storage. Non-volatile memory is one of the major components of connected devices.

Asia Pacific is the largest market size for non-volatile memory market in terms of value in 2016 followed by North America. Some of the other important regions of the market could include the Middle East and Africa and Latin America. Presence of key market players in countries such as China, India, Japan and South Korea is also expected to positively impact the regional market over the forecast period. Increasing use of Next Generation Non Volatile Memory in mobile phones to enhance customer experience is expected to fuel market growth. Low environment stability and high design cost may act as a restraint to market growth over the forecast period. 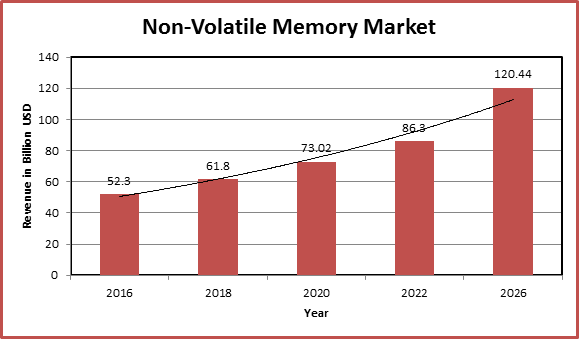 Non-Volatile Memory Market was valued at around USD million in 2021 & estimated to reach USD by 2028.

Non-Volatile Memory Market is likely to grow at compounded annual growth rate (CAGR) of % between 2022 to 2028.