Global Surgical Navigation Software Market is expected to reach USD 1.31 billion by 2026 at CAGR of 6.9%. Since last decade, computer-aided navigation system has experienced tremendous development for minimizing the risks and improving the accuracy of the surgery . Nowadays, some commercially-available surgical navigation systems have already been tested and proved efficient for clinical applications. In Surgical Navigation Software system, uses computer screen to render the navigation information such as the real-time position and orientation of the surgical instrument, and virtual path of preoperative surgical planning.

On future side of Surgical Navigation Software Market, three significant drawbacks of existing image-guided surgical navigation systems are the lack of integration between therapeutic site and the display, the sub-optimal viewpoint of the images shown in the display, and the limited hand/eye coordination. Augmented Reality (AR) has the potential to overcome these limitations by enhancing the actual view therapeutic site view with selected computer-generated objects overlaid in real time in their current position. Augmented medical imaging devices consist of a video camera or transparent screen mounted on an existing intraoperative imaging device, such as a C-arm fluoroscope, an ultrasound probe, or a CT scanner. 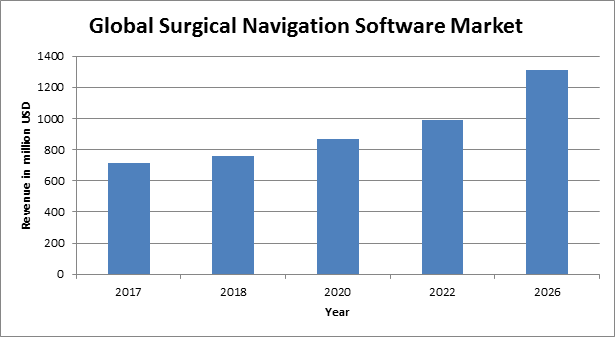