Coffee and tea, both are versatile drinks. Both drinks provide energy moderation by lowering overall caffeine content while serving up interesting and inviting, piquant aromas. Single-serve, ready to drink (RTD) products are now aligned with our food and beverage culture’s which is increasing emphasis on immediacy, flexibility, exploration and personalized/customized wellness. Thus, ready to drink (RTD) proves to be a culturally relevant format. Tea and coffee are much healthier beverages compared to the alternative of carbonated drinks. Hence carbonated drinks are being rapidly replaced by healthier drinks such as tea and coffee as carbonated drinks have many ill effects.

The revenue of global Ready to Drink (RTD) Tea and Coffee Market is valued at USD 71.3 billion in 2016 and it is expected to reach USD 164.2 billion by the end of 2026, growing at a Growth Rate of 8.7% between 2016 and 2026. RTD tea dominated the market with two third market share in the overall market in 2016. However, RTD coffee market share is increasing rapidly as compared RTD tea, owing to its rising consumption. Tea and coffee are becomes the essential ingredients for every individuals across the world. Generally consumption of tea and coffee are more than twice per day in every country. These things are continuously boosting Ready to Drink (RTD) Tea and Coffee market.

The Asia-Pacific region is expected to be the largest Automatic Fire Sprinkler market during the forecast period by value followed by North America. Asian countries especially India and China are anticipated to drive this market rapidly in the forthcoming years. North America is expected to show remarkable growth in demand for RTD tea and coffee market for forthcoming years in due to an increase in health awareness and ill effects of the carbonated drinks. . Increasing urbanization and industrialization with busy lifestyle, increasing per capita disposable income and growing health awareness are primarily drive the global ready to drink tea and coffee market during the forecast period. 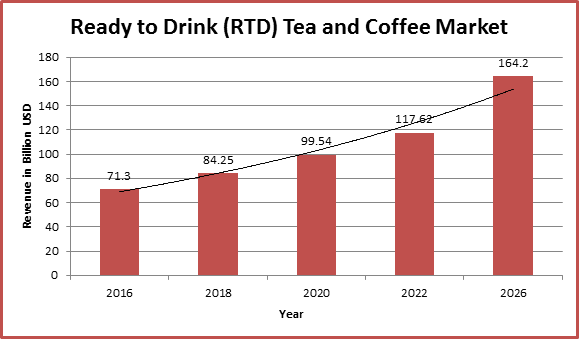