Photovoltaic Cover Glass Market is expected to reach USD 61.42 billion by 2026 at impressive CAGR of 31.68 %. Photovoltaic Glass is a special glass that is used to generate Solar / Photovoltaic power. The solar cells are embedded between two glass panes and, when used in Photovoltaic glass application, they are either crystalline silicon or thin film.When applying crystalline silicon solar cells, the ultra-clear figured glass is used as cover of solar Photovoltaic cells while super clear float glass is for thin film solar cells. A photovoltaic cell is created when a positively charged (P-type) layer of silicon is placed against a negatively charged (N-type) layer of silicon to create a diode and this diode is connected in a circuit via metal conductors on the top and bottom of the silicon sandwich.

The cell or multiple cells are the core of the photovoltaic panel. A glass cover is placed over the photovoltaic cell to protect it from the elements while allowing sunlight to pass through to the cell. An additional plastic anti-reflective sheet is often used to enhance the effect of the glass cover and anti-reflective coating of the cell to block reflection. A panel backing (typically plastic) and frame complete the photovoltaic panel, holding all the pieces together and protecting it from damage during installation.

Application pont of view Photovoltaic glass technology is mainly to power the building. Though Photovoltaic glass are not sufficient to provide the constant power to the whole building due to limited avibility of sunlight but it can use as moderate provider of power to the premises. As traditional power production has become more expensive with limited source Photovoltaic glass technology can provide enough power to basic home appliances like cell phone recharge and computers. Apart from providing privacy and protection from noise and rain, other features such as thermal insulation and shading are becoming increasingly desirable. All of these functionalities can be obtained simply by installing photovoltaic glass to the shell of a building.

Asia – Pacific is largest market for Photovoltaic Cover Glass with China as the leader of the market followed by Taiwan and Japan. In 2017 China ranks first with 41 % of Photovoltaic Cell/ Module Production. Technological advancement, shift towards natural source of energy, increase in pollution and government support for using eco friendly source of power are main factors driving the market globally. Europe holds the second largest market followed by North America. While Middle East, Africa and South America has shown significant growth in Photovoltaic Cover Glass Market. 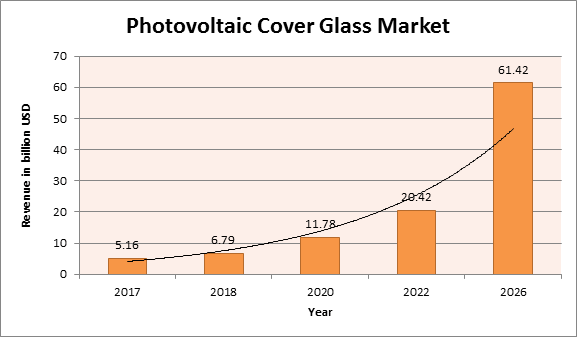