Pentane Market is expected to reach USD 173.91 million by the end of 2026 at CAGR of 6.1 %. Pentane is an organic compound having five carbon atoms bound to each other with single bonds. Pentane is a hydrocarbon having chemical formula is C5H12. It is a volatile, colorless liquid with a petroleum -like odour. Shell is the world’s largest producer of pentane which holds 14.88% of the global market share. The global production of pentane increased from 143577 tons in 2017 to 199325 tons growing at a CAGR of 3.71% between 2017 and 2026. Pentane is employed as one of the primary blowing agents in the production of polystyrene foam. Also pentane is used as a specialty solvent in the laboratory.

Pentane plus is a natural gas liquid. Pentane is a key raw natural gas liquid material followed by heptane, benzene, hexane and octane. The product has a huge demand as a transportation fuel and as a transportation fuel, pentane plus have gained a significant momentum globally. With an increase in natural gas liquid production, market players are likely to witness huge opportunities for growth in the coming years. But various hazards such as high vapor explosion associated with the production of pentane plus likely to damage market’s growth in the near future. Plus the implementation of stringent regulations towards usage of pentane that causes air pollution while burning hampers the global pentane market.

Different factors such as low cost of pentane, rise in demand for pentane from various end user industries, its beneficial chemical properties such as higher strength as compared to other alkanes, superior volatility, increased usage of pentane in fuel blending and formulation from various end-user industries will further drive growth of the global pentane market. Industries uses pentane to generate polystyrene to make insulation materials. Plus, pentane is used as a refrigerant in the fridge and AC appliances that rises its demand in the appliance industry.

Asia Pacific is the largest importer of pentane plus across the world while North America especially U.S. is being established as a leading exporter of pentane plus as they have high pentane plus yield in this region which helps to increased production of natural gas liquids. This situation is expected to remain the same in the forthcoming years. The steady growth of pentane plus production in China and Australia and increasing government initiatives for the promotion of unconventional energy in countries, such as Taiwan, India, Vietnam, China, and South Korea is likely to boost this regional market substantially over the next few years. 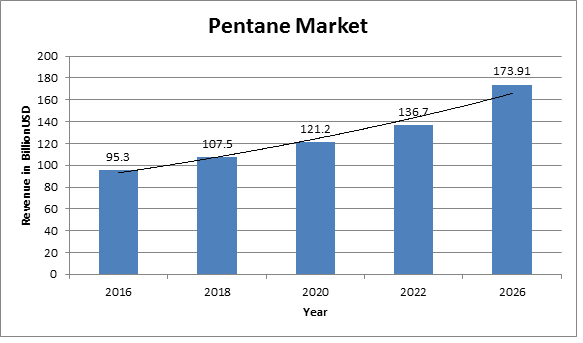