The global pacemakers market is valued at USD 6.1 billion in 2016 and is expected to reach USD 12.8 billion by the end of 2026, growing at a CAGR of 7.7% between 2016 and 2026A pacemaker is an electrically-charged medical device that is placed in the chest or abdomen which helps to control heart beat more regularly with the use of electrical pulses. Pacemakers can be temporary or permanent. Temporary pacemakers are used to treat short-term heart problems, such as a slow heartbeat that’s caused by a heart attack, heart surgery, or an overdose of medicine while permanent pacemakers are used to control long-term heart rhythm problems.

Pacemaker surgery generally is safe. If problems do occur, they may include swelling, bleeding, bruising, or infection in the area where the pacemaker was placed, blood vessel or nerve damage, a collapsed lung, a bad reaction to the medicine used during the procedure. Patient need pacemaker to keep their heart beating properly which helps their body get the blood and oxygen it needs. A pacemaker regulates body’s electrical system, which controls heart rhythm. With each heartbeat, an electrical impulse travels from the top of heart to the bottom, signaling heart’s muscles to contract. A pacemaker can also track and record heartbeat which can help doctor to better understand patient’s arrhythmia (irregular heartbeats ).

Different forces driving cardiac pacemaker market are the technologically advanced diagnostics, robust insurance for treatment, increasing R&D investments for pacemakers and practical advances taken by different governments. Technological advancements in cardiac pacemakers, such as dynamic pacemaking technology, transitional tissue welding, and microprocessor-controlled devices, have also fueled the market. However, the high cost of pacemakers is a key restraint in the global pacemaker market.

North America is the largest pacemakers market both in terms of volume and revenue in 2016 followed by Europe due to high level of awareness pertaining to the benefits of pacemakers amongst healthcare professionals, high adoption of pacemaker technology , technological advancements in cardiac pacemakers. Asia Pacific is expected to register significant growth over the forecast period due to the high-untapped opportunities, a large pool of patients, improvement in healthcare facilities, supportive government initiatives and increasing investments by manufacturers especially in China and India. 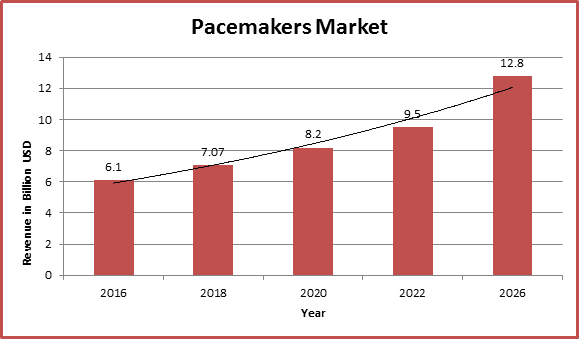