Marine Engine Market is expected to reach 17.5 billion by 2026 at CAGR of 4.12%. Marine engines are the machines used in the propulsion of watercraft. It creates the thrust which is used in the displacement of the ship. Marine engine forms the most integral and important part of the ships. Nowadays functionality of Marine engine is not only restricted to propulsion system but also to deliver safety standard to ecosystem and ship. Cost efficiency is also one the main concern hence deliverance of better cost efficiency has become important parameter in selection of Marine Engine.

On the basis of fuel used for propulsion Marine engines are classified as Heavy Fuel, Intermediate Fuel, Marine Diesel & Marine Gas Oil. Diesel engines contributes the highest share in the segment due to high efficiency, low cost and easy availability. The diesel engine uses the piston’s sweep of the cylinder from bdc position up to tdc position to compress the inducted air, raising its pressure and consequent heat to such an extent (1000ºC) that when fuel is injected it immediately ignites. Diesel engines need a high compression ratio compressed the air sufficient to reach the temperature for ignition. A 16:1 to 20:1 compression ratio, common to small high speed diesel engines means that the air has been compressed to one-sixteenth or one twentieth of its original volume. The wall of the cylinder needs to be heavy gauge to contain the pressure.

In growth scenario of market rise in Ship market, international trading , tourism and cost effective way of transportation are the important reason for the growth of Marine Engines Market. Asia- Pacific holds highest share in the market followed by North America and Europe. Technological advancement, growing infrastructure, high –demand and supply scenario and globalization of businesses are the main factors propelling fuel to growth of market. China and South Korea are among the top manufacturer of ships globally which leads to high demand of Marine Engines in Asia-Pacific regions. Africa and Middle east market are expected to contribute small share in overall market. South American Marine Engines Market is expected to grow at constant rate in forecasted period. 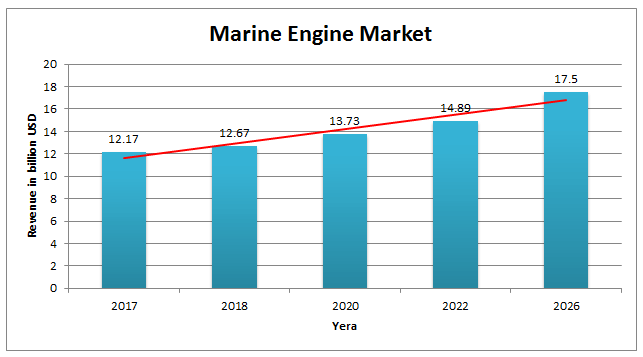