The global KVM switch market is valued at USD 640.8 million in 2016 and it is expected to reach USD 836.4 million by the end of 2026, growing at a Growth Rate of 2.7 % between 2016 and 2026. KVM switch is a hardware device which is an acronym for Keyboard, Video (monitor) and Mouse. KVM switch is sometimes also called a PC switch or an Electronic switch. A KVM switch however, is quite different when compared to a conventional data switch. It allows a user to control multiple computers from a single keyboard, video display monitor and mouse.

The main function of a KVM switch is to control, switch and manage many PCs using a single keyboard, monitor and mouse. By pressing a button on the KVM switch, user can change control from one server to the next. KVM switches are often found in data centers where multiple servers are placed in a single rack. KVM switch categories can be divided as small office and home office (SOHO), small and medium-sized business (SMB), large or high-end global enterprise-level KVM. High end KVM is further divided into remote-controlled high-end KVM and nearby-controlled high-end KVM.

KVM switch are evolved due to the demands of saving space, saving costs, limit cable clutter and increasing management efficiency. KVM switch must ensures the simulated keyboard and mouse signals reach each PC and that during switching there is no effect on the PC’s CPU operations. A KVM switch needs to provide stable video resolution, support multiple computer platforms and operating systems, and is able to interface with many different brands of keyboards and mice. Each KVM switch can only support a maximum number of PC connections, i.e. the total number of ports. A single KVM switch can provide as few as two CPU ports, while a multiple KVM switch installation can offer more than 4000 CPU ports.

The Asia Pacific region is the largest KVM switch market followed by North America and Europe. Asia Pacific will remain as the fastest growing market in forecast period. New advancements in technology, new specifications, innovative concepts, and new applications are constantly evolving in order to support new needs in KVM switches which is boosting this market globally. Some latest technologies such as KVM + Peripheral / KVMP¡BKVM + Fast Ethernet / KVME, Wireless KVM, and KVM over the Net are making it user friendly which is increasing demand for KVM switches. These new KVM technologies are also increasingly popular in a consumer market exploding with new personal home technologies. 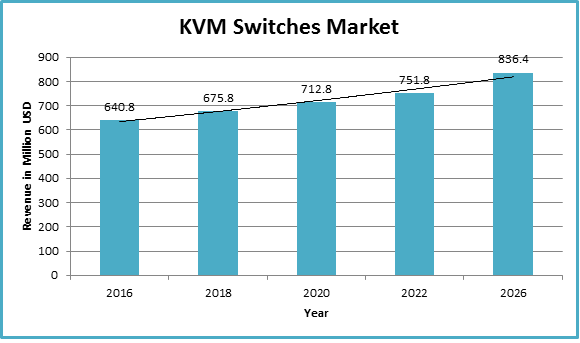