The global hardware encryption devices market is valued at USD 55.8 billion in 2016 and is expected to reach USD 805.5 billion by the end of 2026, growing at a CAGR of 30.6% between 2016 and 2026. Privacy and information security concerns have fueled the increased usage in recent years of data encryption. Encryption is the process whereby one form of information or content is scrambled into an unrecognizable state, according to the rules of a mathematical formula or algorithm. Encryption is an incredibly important tool for keeping your data safe. When your files are encrypted, they are completely unreadable without the correct encryption key. But there are actually two types of encryption – hardware and software.

Hardware encryption can offer several benefits beyond those provided by software encryption. These include faster algorithm processing, tamper-proof or tamper-resistant key storage, and protection against unauthorized code. Hardware encryption devices often have the ability to store encryption keys and other sensitive items in highly protected areas of RAM or flash memory. Since the encryption process is embedded within hardware, the system relies on the stability and robustness of the machinery. All-time activation of hardware encryption devices making it easier for the driver to meet the various government standards especially in applications across service sectors such as banking and financial institutions among others is also giving boost to this market.

Asia Pacific is the largest hardware encryption devices market both in terms of volume and revenue in 2016 due to expansion of IT and telecommunication services and followed by North America and Europe. Asia Pacific and North America region is anticipated to grow at a significant during the forecast period both in terms of value and volume. Rising concern for data privacy, data security issues and emerging trend of portable storage devices are the key factors favouring the Hardware Encryption market. Cost of hardware and updates of the hardware is only possible through device substitution and it is the barrier for grpwth of this market. Huge capital investments are inhibiting the Hardware Encryption market. 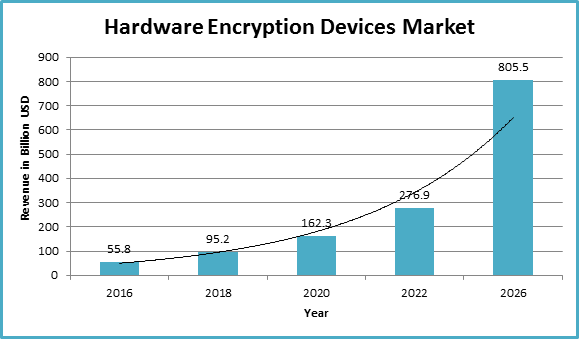