The revenue of global gas detection device market is valued at USD 4.1 billion in 2016 and it is expected to reach USD 6.55 billion by the end of 2026, growing at a Growth Rate of 4.8% between 2016 and 2026. Gas detector devices are safety equipment used to detect and monitor the concentration and quality of gas or a mixture of gases in the air. The Gas Detection Device Manufacturing industry produces detectors used to measure a number of gases, including oxygen, carbon dioxide, carbon monoxide and nitrogen oxide. Gas detection devices are extremely important given that there are so many different ways for harmful gases to leak into the air.

Gas detection devices are the only way that workplaces can identify gas leaks and potential threats within the workplace. Workers are exposed to potentially hazardous gases that can cause harm to their minds and bodies, or even result in their untimely death if gas detector devices are not used. Gas detector devices are critical to safety as they can be used to detect explosive atmospheres, oxygen deficiency, and toxic gases that may have leaked into the air.

The soaring demand for energy has also accelerated the market growth as increasing number customers worldwide have shown a preference for gas-powered equipment. Gas detector devices use a control system to detect harmful gases in its immediate vicinity. They are used in industrial, commercial, and other applications. These detectors constantly analyze and monitor the level of gases in power plants and provide adequate safety for working personnel in the Petroleum, Chemicals, and Power industries.

The North America region is expected to be the largest Gas Detection Device Market during the forecast period by value followed by Asia Pacific and Europe. Asia Pacific is projected to emerge as the fastest growing market. Various technological advancements, various government initiatives regarding workers’ safety, industry associations, easy installation, operation and user-friendliness will boost this market. Precautions to be taken by all enterprises to protect their employees also form a part of these regulations. Growing Need to Maintain Workers’ Safety Driving Adoption of Gas Detection Equipment. 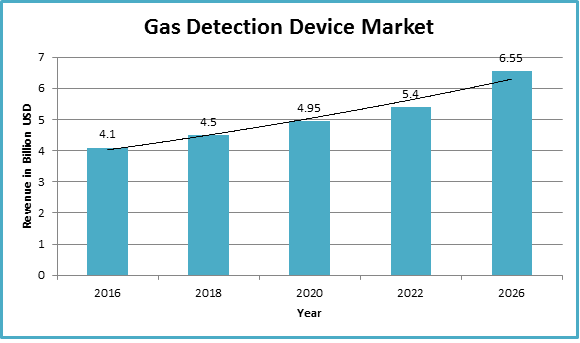