Global Chronic Idiopathic Constipation (CIC) Drugs Market is estimated to reach $2.96 billion by 2024; growing at a CAGR of 6.6% between 2016 and 2024.If the constipation happens chronically with an unidentifiable cause it is known as Chronic Idiopathic Constipation (CIC). The word “Idiopathic” means the cause is not known. Increasing awareness and widespread presence of idiopathic constipation are the key factors for growth of CIC drugs market. Currently CIC drugs market has huge opportunity for research and development.

Geographically, Global Chronic Idiopathic Constipation (CIC) Drugs Market is divided into several regions such as North America, Europe, China, Japan, Southeast Asia and India. In upcoming years, North America is expected to dominate the CIC drug market. In North America approximately 28% of population suffers from chronic idiopathic constipation. Also Government in this region is taking steps to medicate and to develop the healthcare sectors by providing advance technological and developed medication treatments support. These are major factors for growth of CIC market in North America. It is anticipated that growing awareness in developing Asian countries like China and India will create significant growth in the Asia Pacific market. 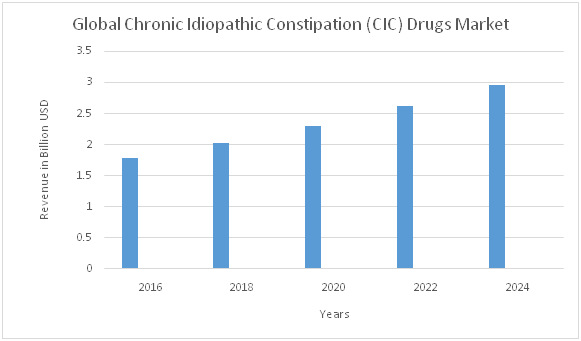