Global Capsule Endoscopy System Market was valued at USD 628.31 million in 2017 and is expected to reach USD 1.39 billion by 2026, at a CAGR of 9.3% from 2018 to 2026. In growth scenario of Capsule Endoscopy Market , introduction of SBCE had resulted in doubling the rate of diagnosis of small bowel tumors to 6–9 % of patients undergoing SBCE for various indications, obscure GI bleeding being the most common indication. More than half of the tumors diagnosed were malignant. Adenocarcinoma is the most common malignant tumor, followed by carcinoids, lymphomas, sarcomas, and hamartomas . Gastrointestinal stromal tumors are the most frequent benign neoplasm (32 % of all cases). Melanoma is the most common tumor metastasizing to the small bowel, although metastases derived from colorectal cancer and hepatocellular carcinoma have also been reported. Tumors are located most frequently in the jejunum (40–60 %), followed by the ileum (25–40 %), and the duodenum (15–20 %).

In capsule endoscope technique a wireless capsule (11 9 26 mm) comprised of a light source, lens, CMOS imager, battery, and a wireless transmitter. The recorder is downloaded into a Reporting and Processing of Images and Data computer workstation (RAPID 8) and seen as a continuous video film. Support systems have been added since the first prototype of the RAPID system, including a localization system, a blood detector, a double and quadric picture viewer, a ‘quick viewer,’ single picture adjustment mode, incorporation of the Fuji Intelligent Color Enhancement (FICE) system, an inflammation (Lewis) scoring system, and all meant to assist the interpreter. 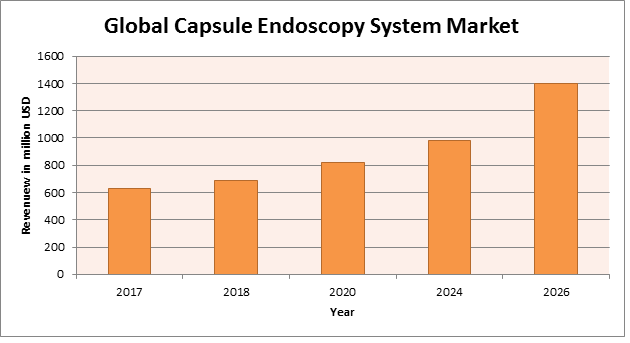