Bioengineered Protein Drugs Market is expected to reach USD 337.68 billion by 2026 at CAGR of 7.1%. A protein consists of one or more polymer chains of amino acids (polypeptides) assembled in a specific three-dimensional structure. Thereby, four hierarchical levels of organization are differentiated. The linear amino acid sequence of a protein and the location of disulfide bonds are referred to as primary structure. Elements of the secondary structure describe the three-dimensional form of local segments. Most prevalent elements are α-helix, β-strand, -sheet and -turn all of which are stabilized by hydrogen bonds between atoms of the peptide backbone. Predominantly hydrophobic interactions but also other non-covalent bonds and covalent disulfide bonds stabilize folding of secondary structure elements into a three-dimensional arrangement or conformation of the whole protein molecule, which is called the tertiary structure.

Besides solely recombinant human proteins, other polypeptide drugs are monoclonal antibodies or viral or bacterial proteins. The importance and the remarkable scope of functions of proteins in the human or animal body are evident in their roles in catalysis of chemical reactions, transport and storage, in providing coordinated motion, mechanical support and immune protection, in generation and transmission of nerve impulses, and in control of growth and differentiation.

Protein drugs can be therefore found in various therapeutic areas like endocrinology (e.g. for diabetes mellitus), immunology (e.g. for rheumatoid arthritis or Crohn’s disease), hematology (e.g. for anemia), infectiology (e.g. in vaccination), neurology (e.g. for Multiple sclerosis), oncology (e.g. for colon and breast cancer) or the treatment of genetic disorder (e.g. for cystic fibrosis). Although only 3.6% of all approved drug substances are bioengineered protein drugs, the research pipelines of pharmaceutical companies contain already up to 25% of these compounds, which reflects the increasing importance of protein drugs.

Technical advancement , Large expenditure on R&D, Government support and increased number of diseases are the prime reasons for the growth of Global Bioengineered Protein Drugs market. US has emerged as a market leader due to large number of researches for the development of advance Global Bioengineered Protein Drugs. Europe also contributing significantly due to increased count Pharmaceutical and Biotechnology companies and Research Institutes. Due to large population base and rise in health awareness are the main factors contributing to the growth of market in Asia-Pacific. Middle East, Africa and South American Bioengineered Protein Drugs market has also shown healthy growth in recent years. 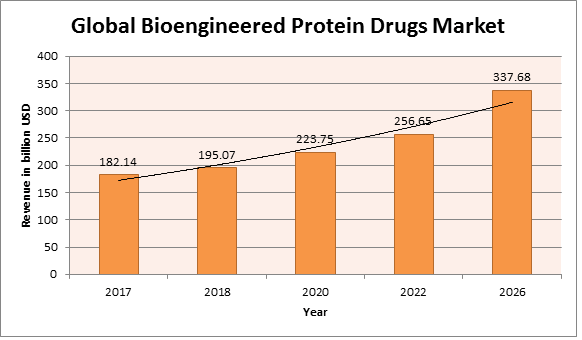