The global Automotive Rain Sensors market is valued at USD 3.7 billion in 2016 and is expected to reach USD 7.07 billion by the end of 2026, growing at a CAGR of 6.7 % between 2017 and 2025. Automotive rain sensors detect rain falling on the windshield of a vehicle. They are commonly used for a system designed to clear the windshield of rain, snow, and debris without driver intervention. Earlier rain sensors were only incorporated in luxury cars but now it has become possible to install the rain sensor in various segments owing to the decrease in average unit price.

Europe is the largest automotive rain sensors market followed by North America. Europe and North America together accounting for more than 50% of the global market share in the automotive rain sensor market. Asia Pacific will remain as the fastest growing market in forecast period. Improvement in the technological advancement, modern mass production of vehicles and increasing demand for luxury features, are the key factors that drive the automotive rain sensor market. Also, increased industrialization with infrastructure development generates demand for commercial vehicles will also boost the market’s growth. 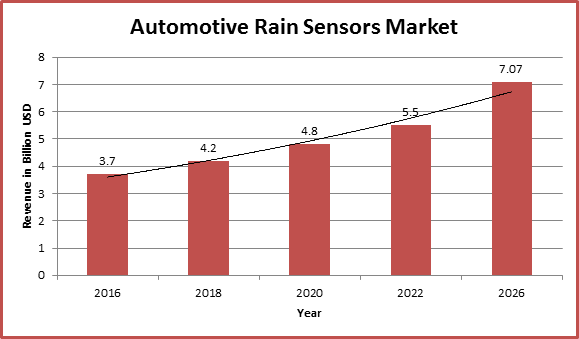