An Automatic Fire Sprinkler System is designed to contain and control an unfriendly fire allowing to escape from danger and decrease the amount of damage to individuals from heat and smoke. An Automatic Fire Sprinkler System is a network of water-filled pipes which starts at water service line and ends with strategically spaced fire sprinkler heads located throughout the space. The sprinkler heads are frangible bulbs filled with a liquid that, when heated, expand causing the bulb(s) to break and the system to release water. The water from the sprinkler head will cover the area where the fire is located and will continue to operate until the fire department can fully extinguish the fire.

The revenue of global Automatic Fire Sprinkler market is valued at 525.3 million USD in 2016 and it is expected to reach 11.26 billion USD by the end of 2026, growing at a Growth Rate of 11.2% between 2016 and 2026.Demand for automatic fire sprinklers systems is boosting because of increasing number of deaths and damaged infrastructures caused due to fire as it is used as one of fire protection measure. Nowadays, automatic fire sprinkler system has been widely used in hotels, motels, nursing homes, dormitories, hospitals,residential and commercial buildings and other similar institution.

The North America region is expected to be the largest Automatic Fire Sprinkler market during the forecast period by value followed by Asia Pacific and Europe. Asia Pacific region is anticipated to be seen double digit growth during the forecast period as countries like China, India and Southeast Asian countries grow rapidly. Various technological advancements, various government initiatives regarding public fire safety, awareness in organizations, easy installation, operation and user-friendliness will boost this market. Commercial segment in the global automatic fire sprinkler systems market is expected to generate maximum revenue as compared to residential segment during the forecast period. 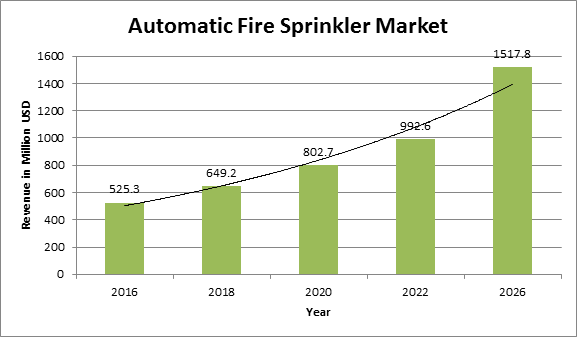